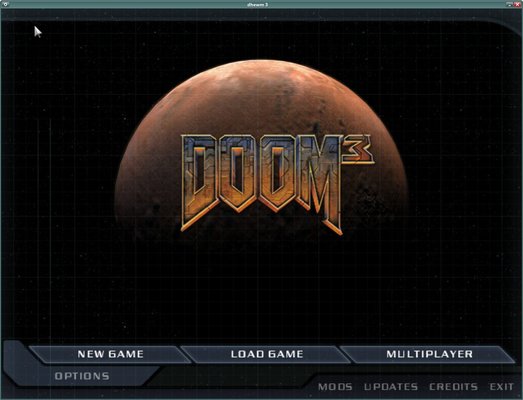 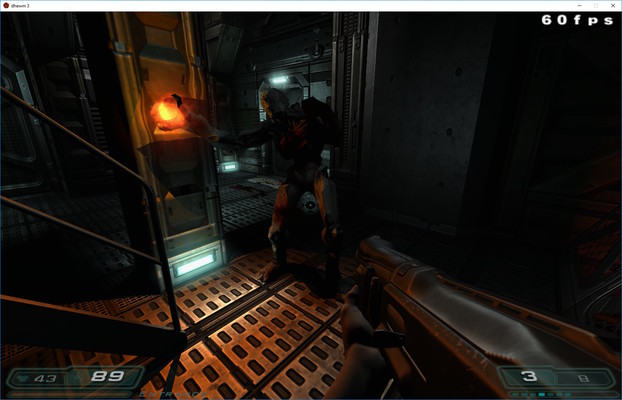 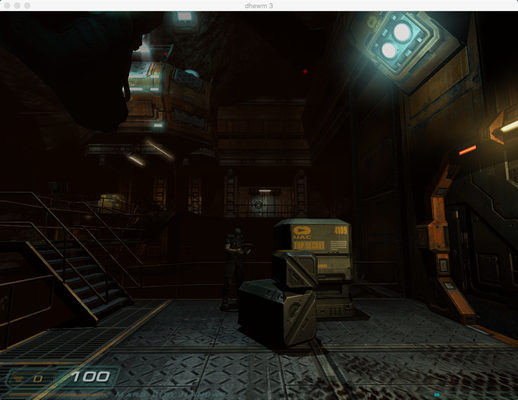 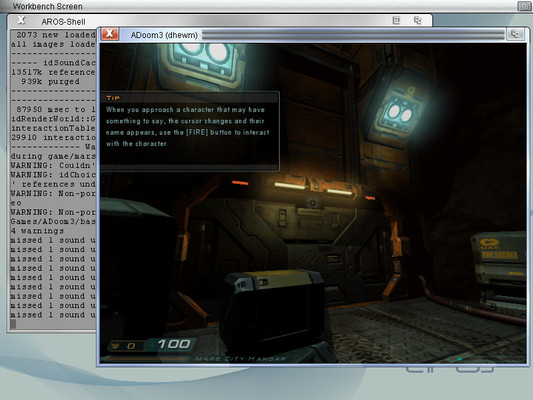 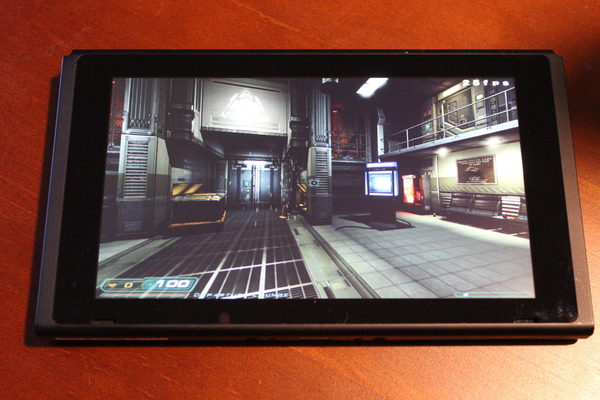 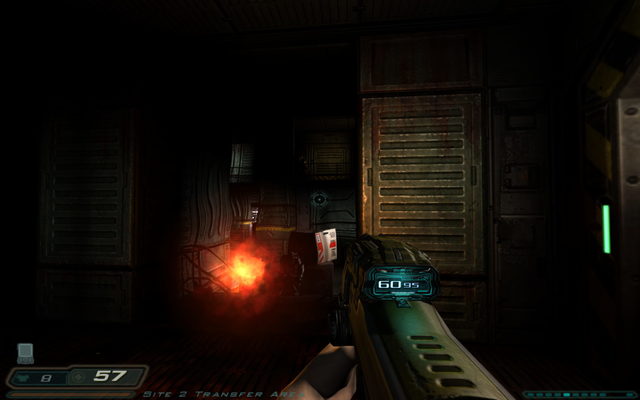 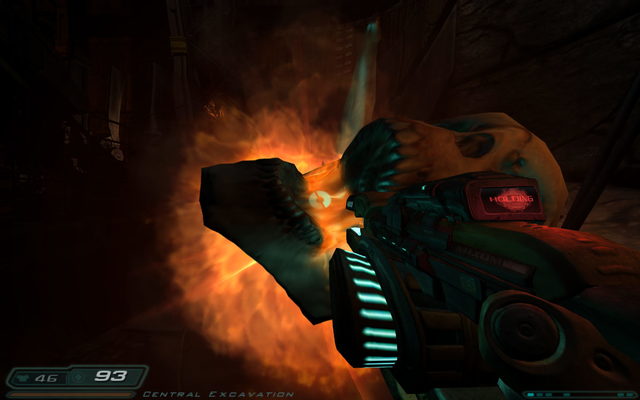 dhewm3 is a source port of the original Doom3 (not Doom3 BFG, for that you may want to try RBDoom3BFG). It's known to work on Windows, Linux, macOS, FreeBSD, OpenBSD and AROS, but it should work on (or be easily portable to) any system that supports OpenGL 1.4 with ARB shaders, SDL and OpenAL.
Compared to the original version of Doom3, dhewm3 has many bugfixes, supports EAX-like sound effects on all operating systems and hardware (via OpenAL Softs EFX support), has much better support for widescreen resolutions and has 64bit support.

It only supports old Mods if they either don't require their own game DLL or have been ported to dhewm3 - see the Mods page for more information.

Note that while the Doom3 source code has been released under GPL, you still need to legally own the game and provide dhewm3 the game data to play. See the How to Install section for more information.

The second Release Candidate of the upcoming 1.5.1 release is available!

You can download it at Github (incl. builds for Windows and 64bit Linux)

A first Release Candidate of the upcoming 1.5.1 release is available!

You can download it at Github (incl. builds for Windows and 64bit Linux) 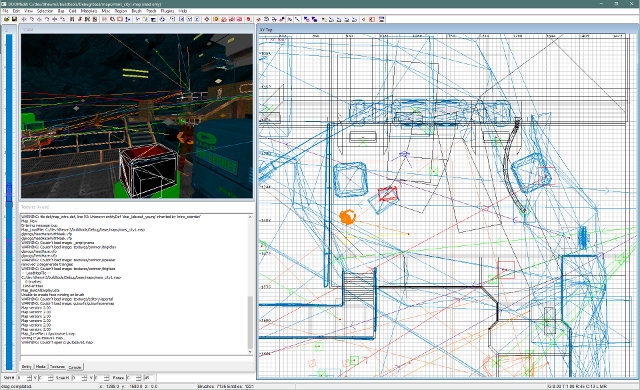 There are no immediate plans for the final 1.5.1 release, but the current status might be interesting :-) 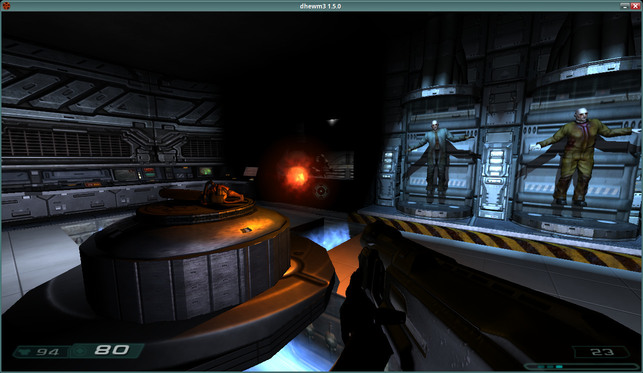 The final version of 1.5.0 release is now available!
You can download it (incl. builds for Windows and 64bit Linux) at Github

dhewm3 now has an official homepage!

I guess it makes sense to be a bit less dependent on Github (especially as it has been bought by Microsoft, but also in general), so I decided to create this homepage with a domain I control.
Another advantage is that it has some screenshots and more user-centric documentation than the README.md.
We'll continue to use Github for hosting the code and issues (and indeed this page via github pages), but if we need to migrate to another hoster some day, dhewm3.org will still be reachable and will link to the new code repo and issue tracker instead.

Getting the Doom3 Game Data

You'll need the game data from a Doom3 installation patched to 1.3.1. Specifically, you'll need the following .pk4 files for the main game:

... and (optionally) these .pk4 files for the Resurrection of Evil addon:

On Linux (and probably other Unix-like systems and maybe even Windows with a mingw shell) you can extract the needed files from the official 1.3.1 patch for Linux with:

On Windows you can just install the game and the official 1.3.1 patch for Windows and then get the files from the installation directory (or copy dhewm3 in there).

First you need to buy Doom3 of course (and the Resurrection of Evil Addon, if you want that too; Note that the Addon is not available in Germany).

Thankfully the game from Steam is already fully patched to 1.3.1.

On Windows, just install it and copy the game data from there (see above for what files are needed).

Same on Linux, thanks to Steam Play / Proton, though you might have to enable it:
In Steam in the Steam ➔ Settings menu, under Steam Play, check both:

On macOS unfortunately you can't just install the game (unless you run Windows Steam in Wine), because it's Windows-only on Steam and Steam (currently?) doesn't use Proton on Mac.

However, you can still download it with SteamCMD.
See this description for macOS or here for Linux on how to install SteamCMD on your system. You won't have to create a new user.

(replace <YOUR_STEAM_LOGIN_NAME> with your steam login name)
When it's done you should have the normal windows installation of doom3 in ./doom3/ and the needed files in ./doom3/base/
It should be possible to get the Resurection of Evil data in the same way, by replacing 9050 with 9070; the files should be in ./doom3/d3xp/ then.

By the way, that number is the "AppID" of Doom3/RoE; if you wanna use this to get the data of other games you own, you can look up the AppID at SteamDB.

First you need to download the Doom3 Demo, of course.

For Windows, you can get D3Demo.exe at Fileplanet and just run the installer.

For Linux (and other operating systems that have a POSIX-compatible shell and tar) you can download doom3-linux-1.1.1286-demo.x86.run from Holarse or some other page that has that file.
Then you can extract the relevant file from the .run installer with

You'll need demo/demo00.pk4 for playing, either in exactly that directory, or you can copy it into base/.
Note that you don't need the patches of the fullversion, adding their pk4s when using Demo gamedata breaks the game.

demo00.pk4 has a size of 462MB but for some reason there seem to be minimal differences between the one for Linux and Windows, so they have different md5sums:


Both work on all platforms though, I guess the differences come from the Linux demo having been released two months after the Demo for Windows.

On Windows you can just download the Win32 binaries from the Download page.
You can either extract them into your Doom3 installation directory, or into a fresh directory and copy the needed game data (see above) in there.
Similarly, you can find x86_64 (amd64) Linux binaries there.

On Linux and *BSD it might be that your package manager provides a dhewm3 package/port that you can install; please refer to that packages documentation on where to put the game data.
You could also try telling dhewm3 where to find the game data with:

(adjust the path to your needs)

If your package manager does not provide dhewm3 (or you're on macOS/OSX and there is none), or you want to use the very latest code, you'll have to compile it yourself. It's not super hard, see the README for details on compiling and the FAQ on where to put the game data.